Illegal Exit is the ArmagetronAd competition that tries hardest to capture the feel of the Lightcycle sequence in TRON. Two teams of three players each fight to the death. Only incam view is allowed in play, and no mini-map. Settings are based on the Adventures of TRON server "TRON Experience."*

*Since the Lightcycle sequence has many interpretations and game physics are highly debatable, these settings are chosen for their unique perspective within Arma. They take full consideration of the program's limitations and have been tested and revised thoroughly by sine.wav and Phytotron.

Between events in an ongoing ladder-based competition named No Exit. Sign up your team and make a challenge!

Illegal Exit can be either a single or double elimination tournament and team sizes may change from event to event. Below are general rules that apply to all IE events.

Only the team leader's Global ID is required for sign up, but it's helpful to have all the players GiD's. The leader should also be familiar with (at the very least) locking/unlocking teams, inviting/uninviting players, and it would be helpful if they knew how to rename teams and change colors too.

At signup, feel free to choose a color for your team. If no color is chosen, one will be picked for you at game time. If two teams have the same/similar colors, they can flip a ]coin in the IRC channel to decide who must switch.

Teams that sign up must have at least one human player. If you cannot fill your entire team with humans you may sign up a "bot" to replace them.* Just type BOT instead of a name on the sign-up page. (Those who are familiar with TRON Experience know that bots play fairly well in this game.) It is not recommended to play alone in a team match; even the best players will have a very difficult time.

*Sorry, you can't submit your own bot. The AoT bots are already highly customized for the game.

Sign-ups will close one hour before the tournament. Brackets will then be filled using random placement. Teams play one match to 25 points.

It's recommended to find a full team of three. However, it is possible to play with just two players, one human and one bot, or any combination of humans and bots. You can even play alone, but this is highly discouraged. Note: Limitations in Armagetron may prevent every human/bot combination.

A 4x2 (four teams of two players each) will consist of eight players fighting it out on the same grid. If there are less than eight humans present, bots will be used to fill in the rest (including a full team of bots if necessary).

The top two teams in each server advance to the next final. In the event of a tie for second place, everyone will play extra rounds until one of the two teams pulls ahead.

No teams. It's you against the rest in an epic battle! Matches are 10 points each, the first player to win 2 is the victor.

Adventures of TRON servers are located in the NE United States and the UK. If you would like to host a server to accommodate more teams and better pings, please PM sinewav on the forums.

As stated above, camera changes and mini-maps are not allowed. However, some players use transparent walls for incam play. This is perfectly acceptable. Not everyone enjoys it or finds it beneficial. Below is a replacement trail texture at 75% opacity. Rename the file to dir_wall.png and place it in your Armagetron\texture directory. Be sure to back-up your original file so you can change it back! 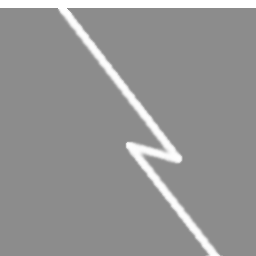