A clan is a group or team of players which competes in tournaments or just meets very often in the groups' servers. Many clans have added themselves to a list which can be found here. This text is focused on several ways to grow and systemize a clan, but it's also supposed to give a short description of their role in the Armagetron Advanced community.

If you've ever taken part in a job interview you know that you have to emphasize your strengths and the important facts.

1. Don't lie about your clanhistory, it's unimportant as long as you don't turn out to be a clanhopper.

2. The phrase "important facts" includes your nicknames (which shouldn't be more than three so they don't cause confusion), the divisions you want to be part of and the number of years you've played this game (so a clan can see how addicted you are ;) ).

3. You can also mention how you discovered the clan or why you want to join but you have to understand that a clan doesn't make exceptions if one of your relatives or best friends is already a clanmember.

4. There is only one good reason for everyone to join a clan which is to have fun together in tourneys and organized matches, usually clanwars (competitive aspect). If that's not one of the reasons why you want to join, stay out.

5. A clan expects its players to be active on the forum and in the game, otherwise it couldn't take part in any tourney. If you don't post anything else except your application you can be 100% sure that it will be rejected sooner or later.

6. The text of the application itself shouldn't be annoying, a clan doesn't care if you use a formal or informal style but it has to be proper (no special font size, colors you can read easily on this background, don't write all in caps unless you want everyone to interprete it as a shout).

7. Clanmembers need to know how to communicate. It requires a moderate English skill to become a member. Of course, language and game experience isn't everything you need.

8. Popularity isn't a criterium. Most clans don't care as long as you aren't known as a reported pain in the neck.

9. Skill is not all. Clans don't accept immature behaviour.

10. The points listed above and below this one are only guidelines. Remember that a clan can also ignore your application without giving you a reason (if a clan just doesn't like you for example).

11. Speak for yourself. If other people try to force the clan to accept you they will most likely not do so.

12. Being part of a clan means also to be part of its up and downs. a clan need dedicated members. If you are unhappy or disappointed about something, go ahead and talk about it!

13. Most clans won't kick inactive members for their inactivity. Some clans have an "inactives"-list.

14.Administrators can check your IP, E-Mail address and collect information from other clans about you. Don't waste their time, they don't like people who apply more than one time without improving significantly, especially if they do it with different aliases as if they had to hide something.

15. If you leave a clan because you don't see anyone online when you play, don't join.

16. If you leave a clan because you cannot play in its most frequented servers, don't join.

17. Most clans accept both American and European players. But your continent shouldn't be a reason to leave the clan. If you can't play in US/Euro lag, then you can't really play.

Clan servers seem to have become a status symbol for clans, but originally they emerged when clans realised that they need a place to play together without being distracted (or distracting someone else). Many servers are provided by clans, some are popular, some aren't. An advantage of these servers is that you are nearly always able to find an admin when you need one, provided that there are enough members of the server's related clan around.

Clanwars are the reason why so many clans exist. As a matter of fact, many players like to compete with opponents who are on the same level, but first they need a reliable, well-organised team. However, the other side of the medal is a usually big gap between the effort players put in regular games and the attention they pay during clanwars (since they want to win by all means). This is why some players think regular games are less fun than clanwars, ignoring that it's their own fault. In other words, playing with non-clan-affiliated players isn't any different when they are doing their best to win. Sadly, some players don't like clans in general :-(

But their reasoning shouldn't be left out here: it's known that some clans just exist on the purpose to assume an air of superiority. That's not entirely wrong, but those clans are usually disliked by most other players (clan-affiliated or not). And in the past, this kind of clan never could establish itself in the same way others could.

Be honest, friendly and apply only when you think you're as good as the other players of the clan.

Some clans have a trainee system for potential members.

"Trainee" is someone who isn't up to scratch yet and needs to be "trained", and therefore doesn't have access to the members area. A good player who has been playing for a very long time usually doesn't need to be "trained". There will be virtually no difference in him from the time he's made "trainee" to the time he's made a "full member", which makes the "trainee" rank for him silly. It's also an extra hassle for him when he doesn't deserve it, giving him an incentive to look at another clan. To really learn about someone, you need more than 2 or 3 weeks. During that 2 or 3 weeks, it's quite possible they'd only end up playing in 1 or even 0 organised matches with your clan, meaning you'd learn practically nothing about them and they learn nothing about you. There's nothing to stop you asking an applicant to play in an organised match on your clan's team, to help in that decision. This would naturally raise the barrier in terms of the quality of players your clan accepts. ~ .pRu|Phenomenon

Usually new players are tested in fortress to estimate their skills in defending, attacking and general fighting. Sumo is clearly not an appropriate setting for such individual tests because the shrinking of the zone puts unnecessary pressure on both the tester and the candidate. In most cases luck decides the rounds. If you are looking for players whoses mazes look beautiful, sumo is the right place to test your applicants.

A division is a subgroup of the clan which is "specialised" in playing in a certain category of servers. Currently the most common divisions are Fortress, Sumo, Capture The Flag, Dog Fight, High Rubber and Deathmatch (aka classic Last Man Standing).

The Division Leader's job is to sign up his team for upcoming tournaments, to announce it and to get the team together. They can declare sumo wars or accept challenges coming from other clans. They are usually the team captains during the game so they are supposed to have a good overview and a tactical understanding, considering that the server in which the team plays requires certain strategies. They can also play a decisive role in the recruitment of new members - forum-activity is a must. Otherwise you all have to do it on your own.

If you have a clan, you should get one! If you pollute the official forums with all your clan's problems the community won't appreciate it. There are lots of ways to get a free forum. Google is your friend :-)

The apple doesn't fall far from the tree.

A disadvantage of being in a clan is that you're associated with everything your clan does which means you could become the scapegoat although some other member of your clan caused the trouble. If you don't want to be responsible for someone else's misbehaviour you can either just distance yourself from it or you expel that player out of the clan. 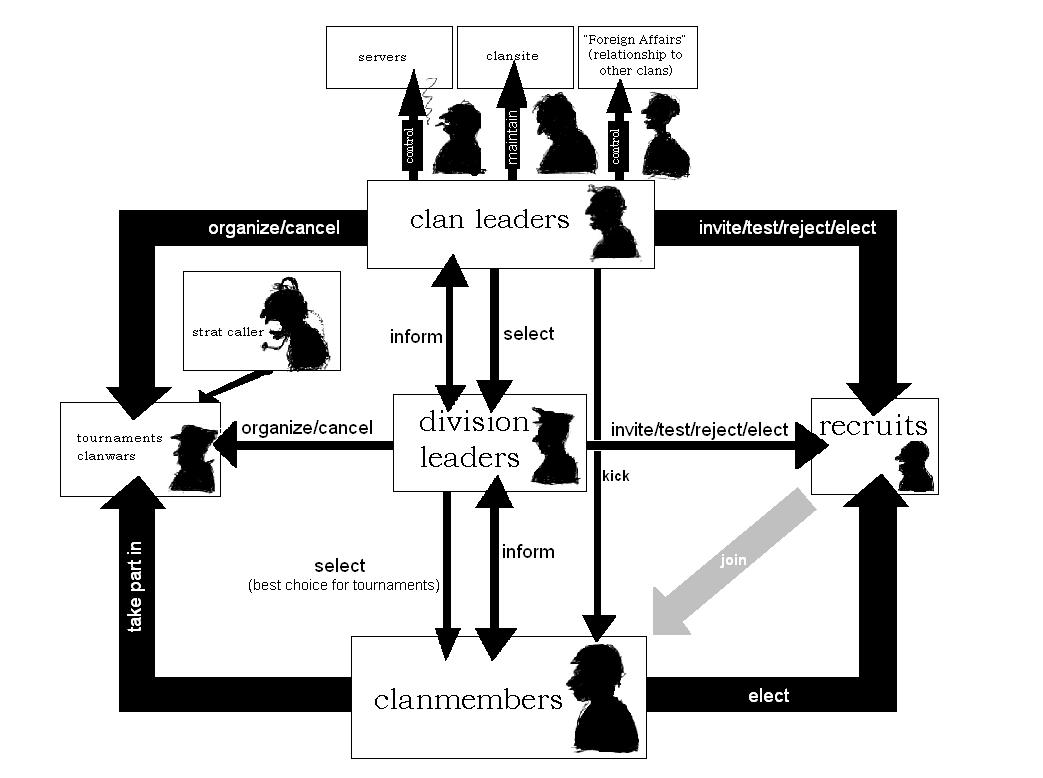 How many members does your clan have right now? 9? Here's my advice: try to expand fast, but make reasonable decisions and test/train your members regularly.

1) Find out what your members are best at eg which position they like and where they can improve.

2) If you play fortress or ctf: make a 3vs3 (attack vs def) whenever you have enough (it doesn't work when you tell them to show up, say, every sunday)

3) when you have a clanwar or tourney, use some time to think about your line up and the best choice for each position (you can make instant chats for that so you don't forget it later and don't need to check the forum while we play).

5) Download a program like trillian which includes MSN/ICQ/Yahoo/IRC/AIM and create an account when you need to. Get your members to register there. It's a good way to remind them of tournaments (and just fun to talk )

6) From here, you can be creative (that's the part which you should keep safely in your clanmembers' area)

Obviously there are two things you have to do if you want to keep your clan alive. Recruit new players and be able to control your anger :-D

- once you are part of the clan, you are associated with all of its members actions. This means whenever someone of your collegues causes trouble, you are automatically part of the problem

- the bigger part of the clan plays at a different time of the day because they come from another continent.

- other clans make your clan look bad so you join them after feeling embarrassed.

- you feel like everyone in your clan tries to become the new leader and nobody appreciates what you have made out of the clan.

- you think someone replaced you and ruined what you have built up, ignoring you and the ideas behind it.

- someone is harming your ego by poking his nose into things he was supposed to stay out from the start. at the same time he doesn't care about his own function or division in the clan.