This page attempts to demystify mazing for players who are not familiar with the practice. This is not a comprehensive guide and is limited in scope. I (sine.wav) am not an expert in mazing and will not cover advanced topics such as how to use mazing in competitive play, though I will offer some considerations. This is just the basics. I welcome others to improve on this guide. Special thanks to Cadillac for providing outlines, diagrams, perspectives, and general consultation.

They type of mazing described below is restricted to game settings that include default CYCLE_DELAY, 400m trails, and 5 Rubber. You might recognize these as standard Fortress and Sumo settings (where we see the highest degree of mazing), but most of the principals described apply to a wide range of game modes. 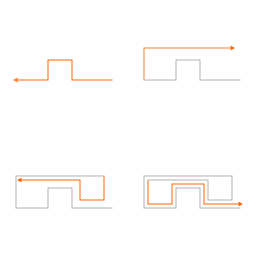 The core components of every maze: creating a space then entering and exiting it.

A maze is any semi-enclosed shape players can enter and and exit. Mazes are generally unicursal and could be described as labyrinthine, but this is not always the case since there is nothing stopping you from making branched sections. Basically every maze ever can be described with these four steps:

A maze can be a simple, single tunnel with a place to turn around at the end or it could be a complex shape that uses your entire trail allowing you to loop through it indefinitely (infinite maze). 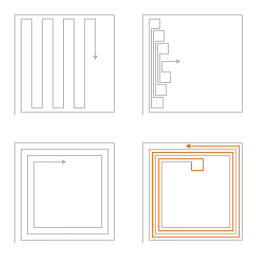 Mazing is the natural result of efficient space management. When playing any Snake/Tron-like game you will eventually be put in a position where you have little room to maneuver. The better you are at maximizing space for yourself, the more likely you are to survive and win. Let's look at a classic example. Let's say you are trapped in square or rectangular space. Your first reaction will likely be to fold your trail back and forth in a radiator type pattern using double turns (Womble). Notice there is a lot of unused space between the folds. However, if you layer your trail on top of itself using triple turns (Kulting) you can see how this frees up much more space. Mazing is the exploration of efficient ways to use space.

One of most basic mazes is a spiral. You trace the inside of your trail until you reach the center, then turn around and exit through the tunnel you created. It's simple, easy to perform, and uses some of the basic skills you'll need to create better mazes. You'll see this pattern over and over again in mazing: sectioning off space for yourself, creating tunnels inside the geometry, then entering and exiting it.

A note on tracing: Some players rarely maze and manage space almost entirely by tracing. The arguments for which is superior are outside the scope of this article. 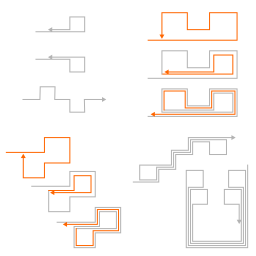 This game is all about precise turning. If you want to get good, make sure you have a camera and keyboard setup that allows you to see well and make "perfect" turns. Most of the best players have multiple keys set to turns (double-binding is more popular than triple-binding) and some kind of custom camera setup. This could be a different field-of-view (FOV) or custom cam settings with a high rise and top-down pitch. Some even use external cam. Whatever you decide, be sure you can clearly see not only your own trail in good detail, but also the environment around you.

Control over triple turns is essential. Make sure you can get extremely close to your trail when needed. Be able to make triples of various sizes as these are key components of most mazes. You should also have enough control over single and double turns to create consistent step patterns.

Learn to control your speed. Long straight tunnels are easy to navigate, but you will quickly reach speeds that make precise turning difficult. Tunnels with lots of close turns may be confusing but they offer a consistent speed. Experience will help you find the right balance. Also, most players use the brake key -- not just for slowing down in an emergency, but to create tighter turns inside mazes. If it feels clumsy to turn while holding the brake key consider using "toggle brake" instead. The argument for toggle brake is, you don't need brakes very often and they recharge rather quickly so you might as well exhaust the entire brake reservoir at once.

Finally, it's very important to develop a sense of how long your trail is. To have complete control over space you must be able to follow the end of your trail. Staying just on the inside edge allows you to protect yourself from attacks and positions you to expand on space when available. 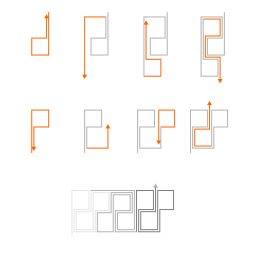 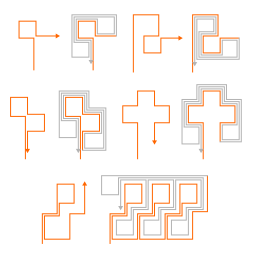 As you've seen above, some of the basic skills prepare you for slightly more difficult building blocks of complex mazes. For instance, triple turns that wrap around themselves leave sensible space to put additional turns. Over time your eyes will start to recognize the positive and negative space naturally made by cycle_delay settings. Building blocks are usually not symmetrical and should be practiced in both directions. Approach mazing in chunks. Find components that make great spines you can easily wrap around then tunnel inside and out.

The key feature of complex, efficient, and infinite mazes is layering. If the basic design of a maze features an enclosed spine that creates a tunnel, with enough space you can put an additional spine inside the tunnel. Usually layering will eat up a considerable amount of your trail. That's fine. It's one step closer to making "infinite" mazes where you follow your trail in and out indefinitely. Take some time to digest this maze which perfectly illustrates layering:

How does mazing fit into the larger picture of general skills? That depends on the context. While some of the techniques in this guide can apply to traditional death-match games, it's the zone-based games like Fortress and Sumo bring mazing into focus. You can be a great player without being good at mazing, but all the topmost players have excellent mazing skills. That's not to say great mazing ability will make you a great player, but it's one skill you should spend some time developing (don't ignore mazing, just like you don't want to skip leg day at the gym).

Players sometimes spend an excessive amount of time practicing beautiful, elaborate, complex mazes. These are rarely used in competitive environments, primarily because mazes are situational. Zone-based games are extremely dynamic, leaving little coherent space to work with. Chains of smaller, functional mazes that use low amounts of rubber and provide quick escapes are the dominant form. However, being prepared to make an ad hoc, complex layered maze can help you win a round, so definitely practice those too.

Mazing buys you time. Making small mazes with just a few turns can keep you hovering in position while you wait for an opportunity to attack or escape. Even tripling back and forth along a line (kulting) can be enough to keep you alive in a fast moving environment.

Mazes can feel passive or aggressive. Some allow you to hide safely inside your own trail for a while, others leave you often exposed to danger (or leave you in a position to attack or escape).

Finally, it should be stressed that knowing where the end of your trail is will often be more important than how good your mazes are. Mazing helps you manage space, but in competition control of space is key. If you get cut badly no maze will save you. Sometimes you have to seal yourself in until you have an opportunity to expand or move, though in general you should consider making the space you occupy unnavigable to intruders.

Some players like to make "signature" mazes, sometimes even constructing them on paper first before spending hours, days, or weeks perfecting them in-game. Mazing is art! 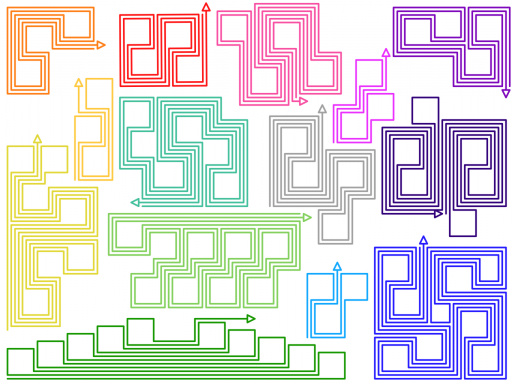 A number of common mazes, and an example of külting (dark green)
Retrieved from "http://wiki.armagetronad.org/index.php?title=Mazing&oldid=57100"
Category: