Players can bind as many keys as they want. Some players triple-bind which is great for making "knots" and in very rare cases people bind four keys (quad-bind), though the vast majority of players only double-bind.

Also, players sometimes describe their turns as "doubles" and "triples" even if they only use one key each to make the turns. It can be a little confusing. Sometime people are describing their keyboard actions and sometimes the shape of their turns.

The earliest known double binder is Locutus. His reasoning was that since he had a bit of carpal tunnel syndrome, it was easier to play the game if he bound two or more keys to the same actions. So when he started doing it, it was to deal with a condition that might otherwise be considered disabling. You know, kinda like having one of those doughnut pillows to drive.

After a certain period of time, another player by the name of Digital Logic popularized the phrase "Double binding is a crutch of the weak", talked a bunch of trash on the forums, and then ran away when the inevitable challenge came. We had the tournament anyway, it was a lot of fun. Here's the original thread 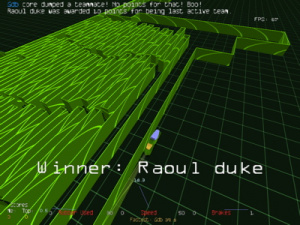 An example of double binding