The predecessor to roulette was multi-person Mazing, a normal maze except with several people participating. Roulette is this concept inverted, however, inverted mazes existed before roulette. The term and rules were popularized and created by players TiTnAsS and Kesshutsu. 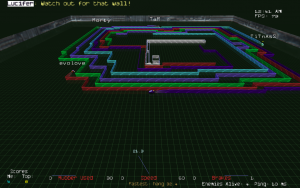 This first image is a screenshot of the players making the mass of tunnels. As you can see, they are all moving clockwise around the outer side of the walls, and leaving enough space to turn back inbetween the tunnels when they need to.

This screenshot is the players doing the same thing as the above screenshot, just so you can get a different perspective on it. 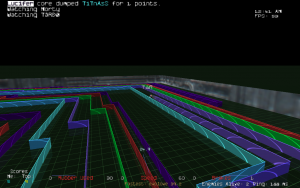 This next screenshot, is the players sequentially turning back into their tunnels. This picture is to illustrate the point of Rouletting. 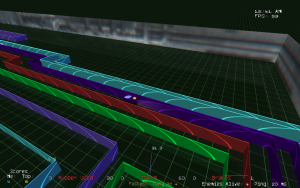 This screenshot, is to show you what the inside of the roulette is like, and how you should go about navigating it.

This last screenshot is to illustrate that the players following the wall in front of them can pull off and create new swerves. These swerves serve as extra turns that create a harder and more fun tunnel for each player.

Roulette and multi-person mazes are related but differ significantly