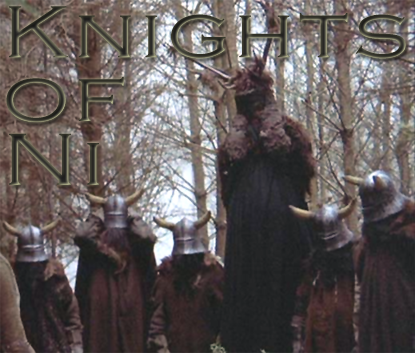 This is a team put together by Lucifer. Membership is closed except to personal invites from the team. There are other teams that need players and have an open membership thing going, unless you've been personally invited by a member of this team, you should look it over. We don't want to be too greedy. :)

You can look at the other teams on the Team List

Ok, here are the names so far suggested. Try not to add to the list unless you really hate all the names. Otherwise, please add your signature (using ~~~~) next to the names you like. Don't be shy, vote for as many as you'd like.

Running results: Current consensus is to just go with Knights of Ni. Apparently nobody feels strongly enough about the name to really push it, and most/all like that name enough to go with it. If you have a strong objection to this, please put your name under this line. If nobody objects strongly enough, we go with it. :) (Since pages need to be made on the wiki for us, they'll go with Knights in their titles, because they need to be made now. They won't be changed, even if our name changes, sorry. That'll be a lot of work I don't want to do)

Objectors to the name:

For those of us in need of the old smart cam heres how to get back, well at least a close facsimile. In autoexec.cfg add the following and then pick custom cam as default in game.