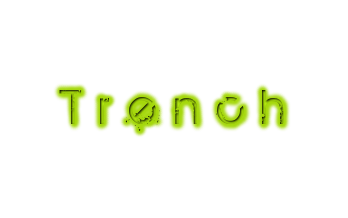 The Trench map, courtesy of vov with a bit of tweaking by Jericho, is composed of 2 fortress zones, a spawn 'base' on each side of the map, and multiple death zones strategically laid out with a timer. At the start of the round each team spawns inside their base facing an exit leading to their own fortress zone. Exactly 10 seconds after the start of the round, death zones spawn in key points blocking access to the spawn base. For the first 3 minutes of the round, respawns are activated, allowing teammates to be revived by touching your fortress zone. This will cause eliminated players to respawn inside their base, forcing them to camp until the 6 minute mark, when the death zones are deactivated.