These servers don't exist anymore, but used to be around. This page is for historical preservation, and also to give folks looking to build a new server some ideas of what's been around. Whenever possible, the reasons for the old servers going down are included.

The name tells, all. Cheers hosted by Angel has been around since the golden years. The server is moderated by a helpful hand of players who just enjoy the game. Visit the community, at http://wwww.Armagetron.Co.Uk/

This mode is the most amazing and the wildest as your shoots bounce off walls five times before they disappear. There are plenty of covers to help you avoid the other player's shots or escape the intense shooting of the player(s).

Nice fortress servers with completly different ladder system. Over 100 various maps are rotating in 14 rounds at Crazy Tronners Wild Fortress (CTWF). This server also provides a few extra maps in the case of a time game at the end of 14 rounds. CTWCatfight (1v1) and CTWDogfight (2v2) are fortresses with custom maps (fake walls, speed hells, chico's rides, race, octagons and many many more) great for challenges. All originates in Europe while some have been clonesd to the United States.

The right place to test your skills. Fast server with high rubber settings. The 100mbit connection did the rest to make the server that popular. Specifications:

This server seems to have vanished along with the clan.

Delicious Desserts is a server for friendly and competitive players who like to have fun. 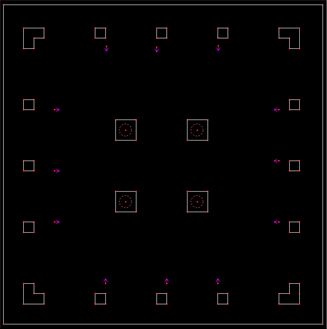 Delicious Desserts ended because there were not enough donations to pay for the hosting provided by Luke-Jr. For more information on {DD} visit the website. www.DeliciousDesserts.co.nr

Flynn's Arcade aims to be similar to the actual movie game grid, with emphasis on maneuvering skill, not just speed and rubber (although high speeds are quite possible). Settings include relatively low rubber, moderate speed and acceleration, infinite walls, and a turbo instead of brakes on one server, and good brakes and slow speed on the other server. Brake server is sometimes used for clan training. Servers are run by .:Avl:.C10ud:. (formerly ianthetechie). Homepage is http://flynnsarcade.net/

A server created by a student of internalDrive's iD Tech Camps program. iD Tech Camps is a computer camp that is held in many locations across the United States. iD Tech Camps' official game is Armagetron Advanced, so it probably deserved a national server. This server is pretty crowded during the summer and may contain a few newbies. However, there is typically at least one experienced player on. Regardless, it is a very fun server with constantly active admins.

This server is hosted by Master Chief with the Armagetron Advanced Superpatch, a mod of the 0.2.8 branch, on a retasked Sony Vaio. Efforts are being made to replace it with a faster server, but users have been experiencing few problems. Users generally have pings ranging from 50 to 150 on average.

Administrators are Master Chief, SmOoThIcE, Wall-E, Puffyfluff, Snoopilicious, Slyshot, and Maes Hughes. Server stats, ladder info, and who is playing can be viewed at http://www.internaldrive.info. Forums are at http://forums.internaldrive.info. The official site of internalDrive is http://www.iDTech.com. A racing server is also available that runs on at least 25 maps at the moment. Master Chief is working to improve the racing server's map selection for optimal playing.

Ion is a test server hosted by zero. It allows players to test out new server settings and maps without having to use their own server. For more information, please contact User:zero.

The first of its kind, a maze server using automatically generated mazes that change every 5 minutes. While it's a mathematical certainty that some mazes must eventually be repeated, it is unlikely that you'll experience this phenomenon.

This server was taken down due to its usage of server resources. It was fun, though, and before its time. 0.2.8.0 hadn't been released yet, so only a few early adopters were able to play it.

There has been alot of buzz lately about this server. It resembles the concept of the FRO|FPS server, but is unique in it's own way. Players spawn on 2 sides of an arena and basically shoot to the death.The extremly high rubber combined with the fact that there is no tail makes it almost impossible to core dump, so shooting is basically the only way to kill. Laser Tag hosts monthly tournaments and is just an all around fun server.

A modified clone of what I consider to be the last classic Nexus9. The point isn't to be better than Nexus, or even exactly like Nexus used to be; think of it more as a tribute than a challenge.

This server was only around for a few weeks.

This server appears to have died with the clan.

A server group and clan started by [NNJG]Ben. The [NNJG] Clan is currently down for a few months. This is meant to be a fun, but competitive clan and server group. [NNJG] Currently offers 4 Servers: [NNJG] Wild Fortress - [NNJG] CTF - [NNJG] Racing - [NNJG] Sumo For server stats and forums, visit NNJG's Website and click on Armagetron Servers in the top navigation bar.

A classic style server with friendly people. This server combines the best aspects of classic and fast play minus any bugs or much hated lag. To be among the best here you need skill and a range of strategies; however all are welcome whatever your ability. For server stats, FAQ and links visit normshome.de

Servers hosted by Arduino and Charged. The rules for high rubber is simple; to coredump your opponent using any technique possible. Players range from noobs who do not know how to double bind, to pros that have been playing for years. Campers are not respected. Develop your unique strategies and compete with others with creativity. Omega Destruction Hr is currently hosted in Austin Tx, which has classic XzL 2006 settings, and the practice server is hosted in the Northern United States.

This is the first server of its kind, but the setup is simple: You all start at about the same position of a long narrow alley with many obstacles in it. Whoever arrives first at the other end and hits the winzone there gets declared the winner — if anyone makes it there, that is. Many different obstacles that are tricky to escape, small killzones, sticky rim walls, a passage where the alley gets even narrower or splits, killzone- only rounds, the ability to lay mines to get rid of your followers and the turbo make this server an experience you don't want to miss!

You drive on the server a genuine running — head at head — with a speed from 0 to > 700. Obstacles will try you there to stop. The level are labyrinth-well-behaved however without erring courses. One must also never the way seeks to separate to simply only loose-race. There are different types of level. Times an obstacle run, times goes it through narrow tunnels, times must you try between the barks to drive. Adrenalin impacts are guaranteed.

Similar to any race server, get to the end first, and hit the win zone. Just here, if you slow down, or make a wrong turn, you smash into the death zone, that is quickly expanding behind you. With an arrange of different maps and brake to boost, it is a very fun server. To see server stats and maps, visit Race From Death Zone Website This server is run by Aang.

Most known server among the spacezone servers, is the High Speed server "Spacezone I" [High Speed]. A server where you must drive at High speed and try to catch you opponent. Spacezone II and III are slow speed servers with different settings.. The Spacezone formula 1 server is a server with custom maps, in here the target is to drive as fast as you can to the end of the grid into the "win zone", the one who first enters the winzone , wins the race. Visit us at http://spacezone24.de

This server offers shorter walls and moderately high wall acceleration. It is also a standard gladiatorial-style arena. This server is run by Swampy.

Lucifer runs this server to provide a gladiatorial fight with a twist: map rotation. Every new match you are faced with a different map. The maps available in the rotation are subject to change but are generally accepted from the community. High speeds and higher rubber make this a fight you won't want to miss, if you think you can handle the relatively small arena sizes.

This server was taken down in favor of Lucifer's interest in pursuing team servers. Occasionally players that remember this server ask to have it back. Like the Labyrinth, it was ahead of its time. The first map rotation server, it was taken down before 0.2.8.0 was released.

The specific incarnation discussed here is as a 3-team fortress server. It had a pretty wild 3-pointed map with lots of hallways for good close fighting, with interesting terrain features that seriously impacted tactics. It was taken down in part due to its low popularity, but mostly because Lucifer wants to reclaim server resources on his server for more important things and there's plenty of fun servers around.

Built for the grid game roulette, this server is run by TiTnAsS.<Shut Down until further notice>